The American Colony Hotel is a boutique hotel located at the seam of east and west Jerusalem, a former Pasha’s palace built in the 19th century, It has an old world feel and over a hundred years of history.  It has elegant charm, is close to the Old City of Jerusalem, and provides all the needs for today’s modern traveler. For those who want to feel like they are in Old Jerusalem, this is a great choice.

We stayed at the American Colony Hotel for six nights.  Security was a big factor for us so we were pleased to be greeted by an impressive manned security gate before reaching the front entrance of the hotel.

The history of the American Colony dates back to the late nineteenth century, following the tragic events of the Spafford family, a devoutly Christian family that left Chicago in 1881 in order to find peace in the holy city of Jerusalem and to offer aid to families in distress.  Following the loss of their four young daughters in a shipwreck, the Spaffords, together with sixteen other members of their church, calling themselves “The Overcomers”, journeyed to Jerusalem and settled together in a small house in the Old City.  With their charitable door open  to their Arab and Jewish neighbors as well as Bedouin from around the city and from across the Jordan River, they established good relations with the local population and became well known for their acts of benevolence and assistance to the community. People referred to them simply as ‘the Americans.’

Seventy Swedes living in the United States joined ‘the Americans’ in 1894, followed by another fifty five from Nas in Sweden two years later. This much larger group required bigger premises. The home they bought was initially built as a palace for a pasha and his four wives. That palace would soon become The American Colony Hotel.

The seeds of the American Colony as a hotelwere sown in 1902, when Baron Ustinov (grandfather of actor Sir Peter Ustinov), finding the Turkish inns of the time unacceptable, needed suitable accommodation in Jerusalem to house his visitors from Europe and America. Before long, the American Colony became a lodging for Western travelers and pilgrims whose expectations were not met by the establishments then existing in Jerusalem.

The hotel’s interior is stylish and comfortable, with oriental rugs, Armenian ceramics and polished stone floors. The idyllic courtyard garden is a perfect escape from the city’s relentless buzz.   We enjoyed exploring the hotel and its history with a walk around the property viewing the newspaper clippings and framed articles of its history and the families that occupied the hotel.

We had a corner Superior Room on the fourth floor of the main house, overlooking the pool area facing the mosque. We could hear the call to prayer 5 times a day starting with the first call at 4:30 in the morning. But, we’re in the Middle East, it’s part of the atmosphere.

Our room was very spacious with the queen size bed on one corner of the room and a sitting area with a desk on the other.  The room had a mini bar, ample closet space, and a safe to store away all your valuables. The room had a classic feel to it. The black and white tiled bathroom and stand alone tub were comfortable. One of my favorite things in the bathroom were buttons in the wall that played classical music, which was perfect for soaking in the tub or just getting ready.

The American Colon offers a choice of 96 rooms and suites in four separate buildings.  All buildings are surrounded with unique gardens.  The rooms feature all you would expect from a 5-star hotel, from complimentary internet, 24 hour room service, to famous Italian “Frette” linen.  The most elaborate suite in the hotel is Room 6.  It was a suite builded by the Pasha for his fourth wife as her winter quarter.  The suite features a terrace and a much talked-about four-poster bed. 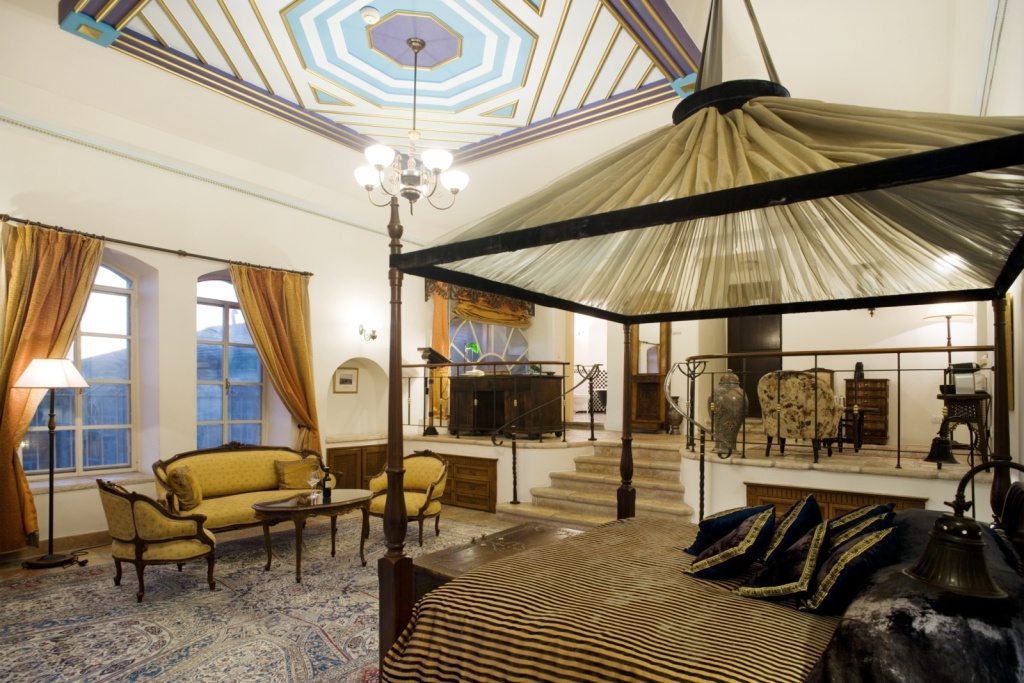 Room Tip: I would ask for a room away from the local mosque as the call to prayer might wake you up early in the morning like it did me.

In the morning we started out with a delicious buffet layout in the Arabesque dining room.  They have an assortment of cheeses, salmon, breads, and made-to-order omelettes.    Lunch is served out in the courtyard where you are surrounded by lemon and olive trees .  You can even smell the fresh herbs that grow in the garden which they use for seasoning.   In the evening you can have dinner either in Val’s Brasserie or the Arabesque Dining Room.  After dinner we would go to the bar downstairs which was a comfortable hideout.

Pool and gym are in the back courtyard and were very empty when we went. It felt like a private estate pool.

The hotel has a pair of shops on the premises where you can buy books, pictures, antiques and Middle Eastern artifacts.   I fell in love with the tissue box in my room that was beautifully decorated and found them at the shop for sale.  I brought three of them.

The location is convenient for visiting the old city. It is about a 10 minute walk to the Damascus Gate. Taxis are always waiting in the courtyard so they are also a convenient option. Add your name to a guest list that includes Lawrence of Arabia, Winston Churchill, Bob Dylan, Uma Thurman, Tony Blair, and Mikhail Gorbachev.

Overall, The American Colony Hotel is an excellent choice for travelers looking for a boutique hotel with luxury in a historic setting.  This is a beautiful hotel with fantastic service and incredible gardens. There is nothing but wonderful things to say about it. It is near the Arab Quarter of the Old City and very close to the Damascus Gate.  We felt very safe and very well taken care of.

To be clear, The American Colony is in what is considered East Jerusalem which is the older part of the city and which has unclear political status. It is the area taken by Israel in the Six Day War of 1967 and today, it’s where political issues are played.  If you want to stay in a safer more modern more established part of Israel, you should choose a hotel in West Jerusalem which is the portion that has been part of Israel since 1948.

Behind the Wailing Wall

Behind the Wailing Wall