I think it’s safe to say that the Galápagos Islands are a bucket list destination for most people, including myself! This gorgeous collection of volcanic islands off the west coast of Ecuador draws millions of visitors every year due to its crystal blue waters, sandy beaches, stunning natural landscapes, and exceptional wildlife. Thanks to Silversea Expeditions, I was able to make the most of my time exploring these unique islands on their luxurious Silver Galápagos Ship. Their cruises are all-inclusive, and so, I did not have to pick and choose between which land excursions to enjoy. I enjoyed them all!

The Silver Galápagos departed from the beautiful San Critóbal Island. On our way to the ship, we took a Zodiac (rubber raft) where we saw so much of what the island has to offer. We circumnavigated Kicker Rock, an impressive rock formation that is a hot spot for wildlife. On our journey, we spotted Frigatebirds, Swallow-tailed Gulls, and, my favorite: Nazca Boobies! While we didn’t snorkel on this day, this is a very popular spot for snorkeling! Kicker Rock is also an incredible place to observe one of the most beautiful sunsets in the Galápagos Islands. And so, while back on board our ship, we enjoyed a lovely sunset cocktail party.

After a day of lounging on our elegant ship, it was time to get our hearts racing! As we sailed further, some of the most spectacular landscapes in the islands started to come into view. Just off the coast of Santiago, you’ll find Bartolomé’s with its magnificent landscapes. You’ll be able to see the famous Pinnacle Rock, a volcanic islet which consists of an extinct volcano and colorful volcanic formations. Some chose to go snorkeling, however, I wanted to hike to the very top to take in the views. While hiking, I was able to admire unique plants such as the Tequila plant, which appears to be dead brush, although its made of leaves covered with small gray hairs.

Don’t forget to bring a camera on your hike, you’ll definitely want it after you master the 388 steps it takes to get to the top of Bartolomé’s Summit! We certainly worked up a sweat but the views from the top were breathtaking and so worth the climb.

Punta Espinoza is located on Fernandina Island and is easily one of the best places to visit if you’re interested in wildlife! This site is home to the largest colony of marina iguanas in the Galápagos. These amazing creatures can be seen sunning on the black lava shores of Punta Espinoza.

Lucky for us, we also saw Sally-light Foot Crabs, Galápagos Sea Lions, Flightless Cormorants and Pacific Green Sea Turtles. These species are so lucky to call Fernandina Island home as its one of the most pristine islands in the world; and we were so lucky to observe them in their beautiful habitat!

On Day 4 of our voyage, the Silver Galápagos sailed across the Bolivar Straight to Tagus Cove on Isabela Island. Some of us chose to climb to the top of Tagus Cove where we hiked 2.5 miles to the top of the volcano crater.

We also enjoyed a Zodiac cruise which took us to an idyllic mangrove lagoon in Elizabeth Bay. Here we saw sea turtles swim close to the surface, and pelicans and herons stalk for food. Sea lions and penguins are also prevalent in this marine sanctuary!

The rest of the group were feeling very adventurous and did some deep sea snorkeling off of Tagus Cove. The water temperature is around 68 degrees in July so it’s essential that everyone wears wetsuits to stay comfortable. They enjoyed a plethora of wildlife such as penguins, Cormorants, and the shy Brown Noddy. There is also a choice to kayak here if you prefer!

Our next stop was Santa Cruz Island, the second largest island in the Galápagos and home to both the largest human settlement and the second largest wild tortoise population. I was beyond excited to finally see the famous Galápagos tortoise in person! However, before visiting the ecological center, we spotted some marine iguanas. If you look closely, you’ll see the resemblance between these iguanas and Godzilla! We learned that Godzilla’s film producer actually visited the Galápagos Islands before making the movie.

Once we arrived at the Faustro Llerena Breeding Center, we had the opportunity to see both the domed tortoise and the iconic saddleback tortoise after which the islands were named. They were bigger in person than I ever imagined and this experience was definitely a huge highlight for me. I’m still so amazed that these magnificent creatures have an average lifespan of 100 years!

Last but certainly not least is Floreana Island, a place that has been luring visitors since the 18th century when whalers hunted the island for tortoises and pirates sought shelter in caves! Nowadays, a sea lion rookery has developed on Floreana’s northern shores. They are friendly and curious creatures who love to go in the water and investigate Zodiacs as they pass by. As we traveled along the coast, I spotted so many more creatures who look for shelter amid the red and white mangroves.

I even came very close to a Blue-footed booby bird which was very exciting! Like most places in the Galápagos Islands, Floreana is another great spot for snorkeling.

As you can see, there’s no shortage of exciting adventures, unique wildlife, and stunning natural beauty in the Galápagos Islands!

Splendour of the Seas Bridge

6 Ways to Upgrade Your Honeymoon

Books and Beaches: Where to Go & What to Read There 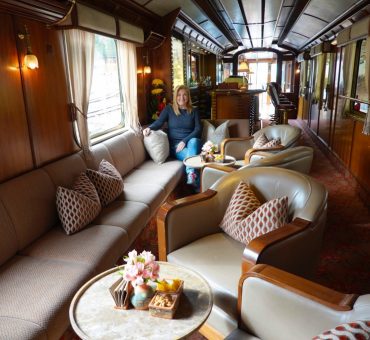