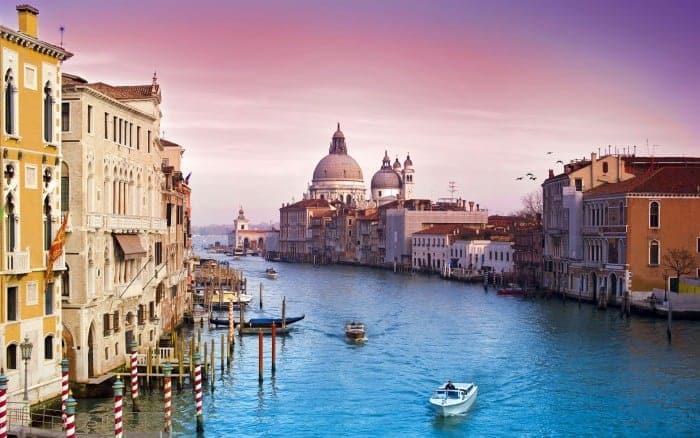 Venice is one of those cities that no matter how many times you visit, you never get tired of it.  Most people say it’s one of the world’s most romantic destinations and I have to agree.   Venice has so much more to offer than just its gondola rides and canals.  It’s a city bursting with art galleries, historic buildings, winding alleys, fascinating museums, monasteries, synagogues, and churches.  One of the great things about Venice is that there are no vehicles.   Be prepared to walk and walking with no cars is what makes the Venice experience special. Be prepared to get lost and enjoy the experience.

The Grand Canal is the ancient waterway around the city, lined with about 170 buildings.  Most of the buildings  were built between the 13th and 18th century by wealthy Venetian families.   The majority of the city’s “traffic” cruises up and down the canal, on private boats, water buses, water taxis or on the famous gondolas.

If you decide to walk around the city, there are a few ways to cross the Grand Canal.  The three famous bridges that cross the canal are Rialto Bridge, Ponte Degli Scalzi, and the Ponte dell’Accademia.  Recently, they added a fourth which has been a huge controversy because it’s designed in a modern style which does not match the Venetian style, the Calatrava Bridge.

The Rialto Bridge opened in 1591, and was the only way to cross the Grand Canal on foot.  The first three bridges were build out of wood and collapsed.  In the 16th century they decided to build the bridge out of stone which is what you see today.  It’s probably one of the most visited and photographed bridges in Venice.

The Ponte Degli Scalzi Bridge (bridge of the barefoot monks) is right by the train station and it’s the first bridge you see when you arrive into Venice.  It’s a great place to take your pictures overlooking the Grand Canal at the very start of your visit to Venice.  Lots of hustle and bustle around here as it’s the main pedestrian bridge from the edge of the island that has the auto bridge, rail and parking stations.

The Ponte dell’Accademia Bridge is the best one to stand on to see the views of the canals. Lovers put locks on the hand rails and usually have some personal note written on it. I prefer this bridge over Rialto because it is typically not as crowded and from here you can cross the bridge going north and then right to St. Mark’s Square or left through a maze of shops and follow the signs to Rialto Bridge. Very centrally located for a nice walk around Venice.

The Calatrava Bridge also known as (Ponte di Calatrava) which opened in 2008.  It’s a long, sweeping curve of glass and steel that was designed to complement both the historic buildings on the Piazzale Roma side of the canal and the 1950s modernity of Venice’s main railway station.  Since it’s been opened, travelers don’t have to go out of their way to cross the canal via the Ponte dei Scalzi or pay to ride the water bus. The Calatrava Bridge makes it very easy to cross the canal with your suitcase.

The famous Bridge of Sighs was built at the beginning of the 17th century.  It was intended to connect the old prison to the interrogations rooms in Doge’s Palace to the new prison, which was situated directly across the river. There are two theories on how the bridge got its name.  The first one is when the prisoners walked the the bridge on their way to the executioner, the prisoners would “sigh” as they crossed the bridge, catching their last glimpse of the outside world.  The second theory is that if a couple kisses under the bridge while on a gondola ride at sunset, they will enjoy eternal love.  Thus, the “sighs” are said to come from lovers who are overwhelmed by romance.

Piazza San Marco is the center of town and one of the most beautiful squares in the world.  It sits next to Doge’s Palace and the Basilica di San Marco.  St. Marks Square is a focal point when visiting Venice. There are several cafes on the square which afford a relaxing venue to admire some of the architectural details of the surrounding buildings.  At night, you can listen to music from some of the restaurants. The sheer beauty of the place is remarkable, and simply watching all the people come and go throughout the day can be a source of entertainment. The Square is always worth a visit, whether it’s early in the morning, when it’s deserted, or in the middle of the day, when it’s teeming with life.  It’s especially beautiful when it’s floodlit at night.

While we have been to Venice several times, we have never taken the tour inside Doge’s Palace because the lines were so long.  I have now read about “The Secret Tour of the Doge’s Palace“.  This is a fantastic tour that takes you behind the scenes of the Doge Palace. Not only do you skip the long lines to enter, you go into the private parts of the palace and are given the history of Venice political rule, law and civil life. You are shown the offices, libraries, secret court areas, original prison, interrogation rooms and secure passages of the palace.

Dining in Venice is fantastic.  We frequently would just wonder down a little alley way and pick a restaurant based on the view or how hidden away from the crowds it was.  We were either very lucky or the Venetians just have extremely high food standards, our meals were all fantastic.  Delicious Italian food.

It was sad to say good-bye (Arrivederci!) to the city of Venice Italy.  We had a enjoyable stay and hope to travel back one day.

6 Ways To Discover Every Fantastic Corner Of NYC