Choosing the right hotel requires a lot of research when traveling with the family.  Family travel in Europe is not like it is in the States. Here, parents can easily find rooms with two queen beds. But in much of Europe, hotels abide by strict occupancy limits on each room. When you combine that with the fact that most European rooms are far smaller than those in American hotels, families quickly realize that it is a challenge to find accommodations for three teenagers in a single room.  That’s how I came across the The Landmark London hotel: it was one of the few hotels in London that offered deluxe double beds in a room the size of a suite.

The five-star The Landmark London hotel, a member of The Leading Hotels of the World, ranks among the finest of the luxury hotels in London. Built in 1899, the Landmark was originally constructed as the last of the great Victorian railway hotels that were constructed during ‘the golden age of steam’.  Perfectly located in central London in the charming neighborhood of Marylebone, the hotel is close to all main attractions and amenities.

You feel a sense of grandeur as soon as you check in the hotel. Besides the shiny surfaces and well-dressed staff that accompany any luxury hotel, we were immediately struck by the vast largeness and beauty of the atrium. It lies a few steps beyond the lobby, and the ceiling stretching up into panes of opaque glass gave the room the sense of being in a wondrous indoor garden. Also, we were enthusiastically welcomed. Before our bags were taken and delivered to our room, we were given a little tour of the hotel.

The hotel has 300 bedrooms and 51 suites. You can decide between one looking into the atrium or out to the street.

Our room, an Executive Family Room (amongst the most-booked) was just a hair short of being full-on suites, with upholstered seating and lots of luxurious features: a comfortable king-size bed, an enormous flat-screen television, large marble bathroom, and a coffee machine.

Our kids were in a Deluxe Double Room, spacious enough for the three of them with two queen beds and a large bathroom with separate bath tub and shower. It had the ideal amenity for them: a batch of white-chocolate macadamia and soft double chocolate cookies! Being teenagers, they had no idea what do with the fruit tray so they passed it back to us.

The rooms were amazingly spacious for central London.   We loved the bathrobes and the Molton Brown toiletries in the bathroom with dual vanity stations, the large tub, and the separate marble-clad shower.

The Winter Garden restaurant sits at the heart of a beautiful eight-story atrium at the center of the hotel decorated with false yet effective Palm trees and plants. It’s a popular spot for a leisurely breakfast, a celebratory afternoon tea, or a relaxed dinner with a pianist tinkling in the background.

The lobby in the atrium is where they set out their elaborate breakfast spread, and where they also hold their celebrated high tea.

Afternoon Tea was one of my favorite things.  They first brought out four different types of finger sandwiches followed by scones, clotted cream, and a choice of jams. Then came a little tray of four different cakes. The tea itself was pleasantly surprising again with lots of choices.

The Mirror Bar is a smart place for a cocktail or late drink.  At the end of a long day walking the streets of London, sometimes you want to have a night cap before hitting the sack. This is the perfect setting. There are comfortable, large chairs and a bar that feels more like a living room. It is very elegantly appointed in keeping with the classiness of the Landmark hotel.

While the lower level TwoTwentyTwo Restaurant & Bar is a more informal bar and restaurant with a wide-ranging menu – in some ways the hotel’s best dining option.

The Landmark Spa & Health Club provides an ideal way to indulge after a day of sightseeing or meetings, with spa treatments, a pool, and gym. We made use of the fabulous spa facilities, and we particularly enjoyed the jacuzzi and steam room.  Featuring a 15-metre pool, sauna, steam room, whirlpool, monsoon showers, and four cocoon-like treatment rooms for some luxe-y treatments.

The hotel is very conveniently located across the street from the Marylebone Station, 5 minutes  away from Baker Street, and 15 minutes from Marble Arch and the shops at Oxford Street and Bond Street.

Having stayed in various hotels across London, I can honestly say The Landmark London excelled any other 5 star hotel I have ever stayed in. The service really made our trip. I have never been so well looked after in a hotel as we were during our stay here.  Making our stay in London at The Landmark London a Luxurious Family Stay – so much so, we did not want to leave.

We stayed as guest of The Landmark London at a reduced rate, but all opinions are my own.

Elements of the Ultimate Travel Outfit 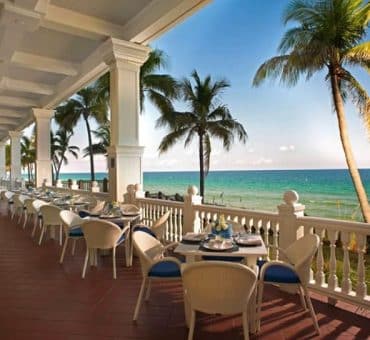 Ocean2000 - Dining on the Ocean in Fort Lauderdale