When you think of Seattle, the first thing that comes to mind is The Space Needle.   The Space Needle is a landmark and a symbol of Seattle.  It was our first trip to Seattle and since we were only going to be in Seattle for one day, I wanted to hit the highlights hard.   So I made reservations for lunch, months before our trip, at the rotating SkyCity Restaurant at the top of the Space Needle.

The Space Needle was build in the Seattle Center for the 1962 World’s Fair.  It was once the tallest structure in downtown Seattle but a few skyscrapers have now surpassed it in height.

Once we arrived at the Space Center, we valet parked our car and headed inside the visitors/reception area.   We told the lady behind the counter that we had a 1:00 p.m reservation.   They directed us to the elevators where we were immediately escorted skywards to the SkyCity Restaurant right below the Observation Desk.

The elevator ride up is quick.  The trip from the bottom to the top on a non-windy day goes at 10 miles per hour and takes around 41 seconds .  On a windy day, it slows down to 5 miles per hour.

We waited in the lobby area of the restaurant for a few minutes.  I noticed that the floor where my son was standing was moving.  So he decided to place his foot in the lobby area and the other inside the restaurant. We watched as slowly his feet started to separate and widen to the point that it was almost doing a split on the floor.  He thought that was very amusing.

We were seated right by the window.  The weather outside couldn’t have been any better, with clear skies and a view of Seattle’s skyline for miles to see.  One can’t ask for a better view of Seattle than from the SkyCity Restaurant at 500 ft (150 m).   Not only can you see downtown Seattle skyline but also the Cascade Mountains, Mount Rainier, Mount Baker, Elliott Bay, and the surrounding islands.

I decided to eat light so I went with the Spinach and Stawberry Salad which came with goat cheese on the top. It was delicious….In fact all of our meals were excellent.

As we ate and admired the scenery, the restaurant made its 360 degree circle around.   My husband decided to leave a quarter on the window to see how long it would take to circle around the restaurant.  More and more people caught on and started leaving napkins with messages on them.

It’s hard for my kids to pass up on dessert.   So when our waitress told us of the Lava Ice Cream Dessert, they were all excited to order one for each.  I of course had to join in on the fun.    One by one the waitress brought out the dessert, which was ice cream with dry ice underneath.  Our table was smoking!

After dessert we walked up to the Observation Deck (admission included) with our reservation. The observation deck is 520 ft high and has a gift shop, a concession stand, and lots of attached telescopes to help people appreciate the view.

Sharing a meal while rotating and taking in the amazing views, what’s not to like?

Tickets: $18 per person for early day or $24 per person for midday to visit the observation deck.   Lunch cost us around $46 per person (including tip) which might sound expensive.  But, if you remember that it costs $24 to just go to the observations deck, the lunch starts looking like a pretty good deal.  Its just another $22 and you get the whole three course luxury lunch experience at the top of the Needle.

Valet Parking:  The cost is $12.00 for three hours with validation from SkyCity Restaurant.

6 Ways To Enjoy A Luxurious Weekend In Mayfair

The Top 5 Landmarks to See in Harlem

5 US Road Trips That Are Highly Recommended 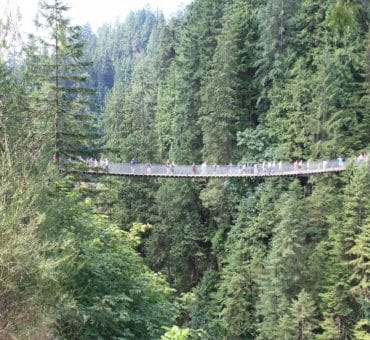