Melissani Cave is surrounded by forests with mountain slopes to the west.

The cave was rediscovered in 1951 by Giannis Petrocheilos, and opened to the public in 1963. During the first exploration in 1951, an ancient lamp, now on display in the Archaeological Museum of Argostoli, was found there. In 1962, an excavation produced few but important relics of a former Minoan culture on Cephalonia. Oil lamps, plates and figures show the God Pan and several nymphs. This is, why the cave is sometimes called “Cave of the Nymphs”. The lake was named after one of the nymphs, the nymph Melissanthi. Myth holds that Melissanthi drowned herself in the lake when Panas rejected her love.

The opening on the surface of Melissani Cave lets the light in, making the water so clear that boats appear to be gliding through the air.

It’s best to go see the cave when it’s sunny so you can enjoy the full effect of the light streaming through the hole in the ceiling of the first hall of the cave.   We were lucky and could not have had a more perfect day We happily paid the entrance fee of 7 Euros per person.

There is a flight of steps down to enter the tunnel.   As you descend down through the tunnel, it’s dark and a little steep.  There are handle bars on each sides to hold on to.   At the end of the tunnel you see the light of the lake shining through.

At the end of the tunnel, small row boats wait to take visitors across the lake to admire the spectacular sight of the stalactites and the changing colours of the water.

Our Tour to Lake in Melissani Cave

Shortly after we arrived, a tour group showed up and it got very crowded.  The row boat was big enough to hold all of us (group of 5), plus 3 other people.

The boats are the only way to tour the lake.  The cave once had two big chambers which caved in several thousand years ago.  Today the cave is shaped like a “B”,  with two big water filled halls and an island in the middle.  The first hall has a big oval opening to the surface where the sunlight shines in.  The second is a huge cavern with an arched roof and numerous stalactites and stalagmites.  The boats tours take you through the halls of the cave.

We first circled around the first hall with the oval opening in the surface, where the light comes through.  We passed the island on the opposite wall, where a small channel exists.  The channel that connects the two halls is very narrow.  In some areas it’s too narrow for the boatmen to row through, so they pull the row boats using a rope.  The second hall is a huge cavern with an arched roof, which was also formed by a collapse.

The boatmen that row the boats were very accommodating by taking pictures of us, and constantly providing interesting information about the melissani caves.

Melissani Lake is 36m high, 40m wide and 3.5 m long. A balcony was built on top of the cave for tourists to get a spectacular view of the inside from the top.   The water level inside the cave is a meter higher than sea level. The water in Melissani Lake is brackish, a mixture of fresh and salt water.  Melissani Lake receives some of its water from the Katavothres on the other side of the island. The Katavothres are a series of swallow holes that sea water flows into. No one was sure where the water went until dye was dropped into the Katavothres. Fourteen days later the dye turned up in Melissani Lake, proving there was at least one hydrologic connection under the island.

The tour is short  lasting only 15 minutes.

The Melissani Cave is a must for all visitors to the greek island of Kefalonia.  It was one of our stops on our Royal Caribbean Mediterranean Cruise on Splendour of the Seas.

Things to See in Passau Germany

How To Plan a Luxury Trip to London

What to See in Lviv, Ukraine: The Pearl of Europe

7 Islands For A Sailing Adventure In Greece

The Little Touches that Made our Vail Stay Unforgettable 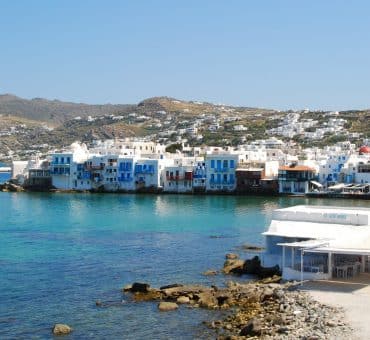 Mykonos Greece - Where to Go, What to See