San Francisco is a luring destination on the map with an absolutely booming real estate market. Long-time residents are happy to call it home while future-residents from around the world are ecstatic about the high-rise luxury market presence. Developments like The Harrison are sprouting up all over the city, joining ranks with New York City as a growing vertical haven.

But what if you only had 24 hours in a destination like San Francisco? While you can’t see every priceless view or experience every district’s culture, we guarantee this plan that will allow you to feel the ebb and flow of one of the most famous destinations in the world.

If you’re only in town for one breakfast, Tartine Bakery and Café should be your stop. The restaurant has reached cult status among the locals, and tourists from afar, alike. Drawing attention from the New York Times, USA Today and Bon Appetite, to name a few, Tartine’s breads and pastries lure-in a line of anxious customers down the street, seven days a week. So either arrive at opening or plan to practice your patience while your senses are teased by the smell of freshly baked goodies from inside.

While you are in the Mission District, it’s a good time to check off the next stop from your list: Dolores Park. The 16 acres of lush green including a massive, modern children’s playground and newly built basketball and tennis courts, is a sanctuary respected by all of San Francisco’s residents. What was once a safe refugee camp for victims of the 1906 earthquake, is now a gathering place for festivals, performances, cultural events and everyday relaxing, always supplying spectacular views of the city’s skyline.

Next, jump on the city’s Metro at the top of the park and take the J-line directly downtown to Powell Street, one of the main tourist atrractions of San Francisco. Although you may think it’s best to steer clear of the tourist traps when traveling, downtown San Francisco is something you won’t want to miss out on. The area is a mecca for shopping, street performers, restaurants and the famous Cable Cars. The secret about downtown is that locals enjoy the vibe as well and they make up the chameleon backdrop to hustle and bustle.

When lunch-time calls, the city answers! But hands down, a must-visit lunchtime destination is Ike’s Place. Have you ever been to a restaurant with over 400 sandwiches? On their secret menu, that is. That’s right! Ike’s sandwiches are craved by every customer who takes a bite. Their bread is baked fresh to order and their soon-to-be-patented “Dirty Secret Sauce” is spread on every sandwich and baked right into the bread. Smothered in awards and praise, Ike’s is gem you have to experience for yourself to understand the “awe”.

If you’re in San Francisco during baseball season, it goes without saying that a Giants game at AT&T Park should be on your list. Don’t worry if you can’t afford a front row seat. Every view in the stadium is a good one! So go for the bleachers and spend half of your time roaming around the stadium eating Dungeness crab sandwiches, bacon-filled hotdogs from local 4505 Meats and Gilroy garlic fries. The food alone is temptation enough to attend a game!

The afternoon in San Francisco is also best spent on a cruise of the bay. Take in the best views of the bay onboard one of the city’s many vessels that take you along the shore, out to the Bay Bridge and up to the Golden Gate. Another way to take in the sites, and from shore, is an afternoon at Crissy Field. As one of the Golden Gate Parks National Conservancy’s, it offers a stunning backdrop to bike, walk or picnic with iconic views of the Bay and the Golden Gate Bridge lined with beaches, picnic tables and activities.

For dinner, there isn’t one cuisine you won’t find in San Francisco from five-star, internationally acclaimed dining options to hole-in-the-wall family-owned cafes. To name a few one-of-a-kind options for your list: the Tonga Room at the Fairmont, an icon of tiki pop culture fully equip with a 75-foot lagoon; Foreign Cinema known for their screenings of just that, foreign films, during dining hours as well as their acclaimed chef talent and owners with a daily changing menu of seasonal ingredients; and the world-famous AsiaSF, a celebration of diversity well-known for their famous Ladies of AsiaSF, a team of transgender stars who perform atop the red dragon runway bar.

The best way to end a quick 24-hours in San Francisco is with a visit to The EndUp, San Francisco’s most legendary late-night club. The intimate and interactive environment offers a uniquely decorated cave-like interior, opening up onto an equally impressive lush, tropical patio. Opened since 1973, The EndUp is still on the cutting edge of the music, dance and DJ scene with early morning hours, which means you can enter at the edge of midnight, but be ready with sunglasses as you emerge sometime around brunch the next day.

Note: This is a guest post by Candace Schaffer; the views and opinions expressed are those of the author. Candice Schaffer works at Knightsbridge Park, a leading digital marketing firm for luxury real estate brands such as Four Seasons Private Residences and Fasano Hotel and Residences at Shore Club.

Lauderdale by The Sea Restaurants

Hidden Gems of South Carolina You Need To Visit 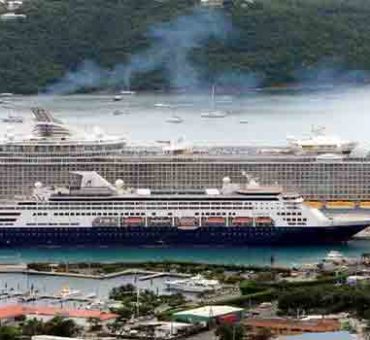 Why A Caribbean Cruise Is The Ultimate Luxury