The Fiesta de las Cruces or Cruz de Mayo (In English  “Festival of the Crosses” or “May Cross”) is a holiday celebrated on the third of May in many parts of Spain. I was very lucky to be in Tenerife this year and be part of it.

Every year, on the third of May, the city of Santa Cruz de Tenerife celebrates the most important date in the calendar of the city. May marks the anniversary of the founding of the city, inaugurated on May 3, 1494. Since that day, it has been celebrated as a local public holiday on which the city is adorned with flower crosses and the main streets are filled with the rhythm of folk music. Among the numerous events taking place, the most striking, colorful, and emotional is undoubtedly “Las Cruces” (The Crosses).

La Rambla del General Franco is the place that for years has been chosen to exhibit these works of ephemeral art.  The actual crosses which are around three metres high are made by the people of the neighborhood and displayed all along Las Ramblas.

Each year it grows in popularity and is more open to the imaginative possibilities of their creators which are local companies, associations, and schools. Everyone wants to participate in this event that has become, over the years a contest for the most innovative crosses.

To the chicharreros (local inhabitants of the island of Tenerife), these celebrations have long had a religious justification. May 3 is said to be the date when Saint Helen, the mother of the Emperor Constantine, discovered the pieces of the True Cross.

Although many places add their own local elements to the celebrations, the basic features are common everywhere. Groups of neighbours make big crosses out of flowers to decorate their patios, plazas, and street corners. This often takes the form of a competition, with prizes for the best displays. Red and white carnations predominate in the crosses, but other spring flowers, local ceramics, shawls (on the balconies), candles, and even copper pots may appear around them.

Here is Ludovica who was looking for the cross that her school made for Fiesta de las Cruces.  She was happy when she found it and was proud when I asked her if I could take her picture in front of it. Although her school didn’t win, she said it was still an honor to be part of the competition.

All those who visit the Rambla will also enjoy the Regional Exhibition of Flowers, Plants and Traditional Handicraft Canaria in the Parque Garcia Sanabria. It is mostly dedicated to both the exhibition and sale of flowers and plants as gastronomy and traditional Canarian craftsmanship.

So, if you´re planing on going to Tenerife in early May, be ready to eat, drink and dance and celebrate with the people of Tenerife their unique Festival of the Crosses!

How to Find Hidden Gems on Vacation

How You and Your Friends Can Travel the Mediterranean in Style

The World’s Only Drive-in Volcano

Top 3 Advantages of Renting a Villa in Mykonos or Santorini 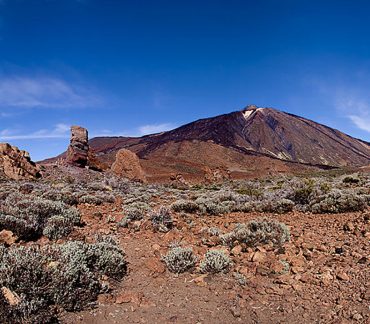