Falconry is an ancient sport that has been accredited to both the Mongolians and the Persians some 3,000 years ago. Ireland adopted falconry sometime in the seventh century, however, most records of the practice itself date from the 19th century onward. A sport mostly monopolized by the nobility, Brehon laws were developed to protect the raptor birds that were so highly prized. Today, falconry is still very popular, and anyone who tries it is sure to love this singular experience!

At Dromoland Castle, we met with our falconer on one of the many bright green lawns in front of the lobby. Perched on her gloved hand was our bird of prey for the day: Bomber, a striking Harris Hawk. For those who have never practiced falconry before, you can barely feel the added weight of them sitting on your hand. Everyone is provided with a glove while handling the bird to ensure that those powerful talons don’t leave any marks! 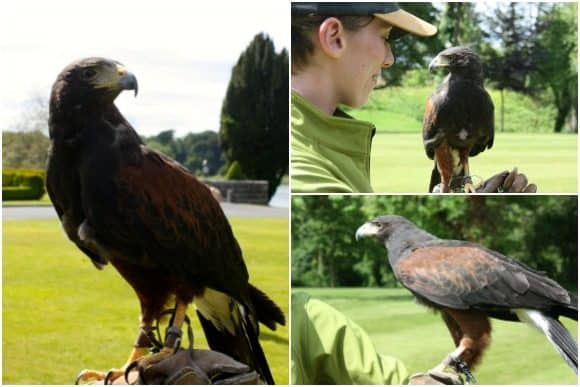 Our falconer gave us each multiple turns to hold Bomber before allowing him to fly around for a bit. Sometimes, he would zoom off several yards away and land on a tree. If he didn’t respond to her whistle, she would place a piece of meat on one of our gloves (a little gross but at least we didn’t actually have to touch it!). She then instructed us to extend an arm, signaling Bomber to fly back and eat the meat right off of the glove! The entire experience is incredible for anyone who wants to get up-close with these amazing animals.

The aviary has any amazing assortment of bird species including owls as well as different types of hawks and falcons.

Our favorite was undoubtedly a tiny barn owl named Pickles who eagerly jumped on our gloves when presented with an extended arm. Unlike some of the larger birds of prey, Pickles enjoyed being petted and cooed over. In contrast, there was an enormous eagle owl whose head swiveled to keep intimidating eye contact with anyone near him.

Each bird had its own distinct personality, and the falconers let guests take their time to get acquainted with the friendly ones and observe the less social birds from a safe distance.

Our falconer was knowledgeable about each bird and expertly taught us the basics in a way that made everyone feet safe while also giving our hawk some freedom. We all loved it and highly recommend to anyone who has the opportunity to discover or re-experience falconry at Dromoland!

For more information:   Dromoland Castle’s The School of Falconry or email: daveatkinsonfalconry@gmail.com

The Most Romantic Places in Europe To Propose

The 10 Best Rooftop Bars in the World!