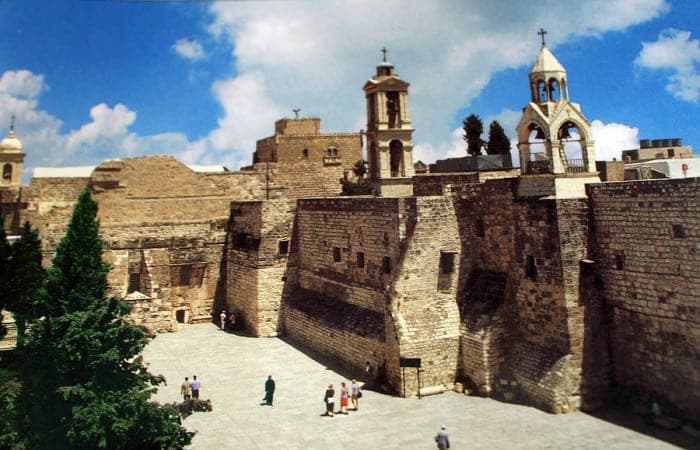 To me, the word Bethlehem conjures up vivid images.  Having been brought up Catholic, I heard the story about the birth in the manger from a very young age. Every Christmas, we set up the scene of that famous manger scene with donkeys, sheep, Mary, and the Baby Jesus. At church and at school, we had plays about the nativity. So I was very excited to see that Bethlehem was on our itinerary and was looking forward to seeing what was left of the manger or barn.

Most folks have seen the Church of the Nativity in Bethlehem on television. Every Christmas Eve, lots of television news shows feature a one-minute slot showing folks celebrating Christmas in Manger Square. What is known to the world as Manger Square is actually the courtyard of the Church of the Nativity. The church is that squat gray-brown stone building in the background.

When you think of Bethlehem, the first thing that comes to mind is that it was the birth place of Christ and it all happened in the Church of Nativity.  The Church of the Nativity in Bethlehem is one of the oldest continuously operating churches in the world. The structure is built over the cave that tradition marks as the birthplace of Jesus of Nazareth.  For Christians, it is one of the most holy of holy spots.

When we arrived, the first thing we saw was a beautiful church and at the very far end, a small rectangular opening to the church, called the Door of Humility. The entrance is so small that you have to bend over to go through it.  We went through one by one into the little opening.  It is said that in Ottoman times it was created to prevent carts being driven in by looters, and to force even the most important visitor to dismount from his horse as they entered the holy place.  The doorway was reduced from an earlier Crusader doorway, the pointed arch of which can still be seen above the current door. The outline of the Justinian square entrance can also be seen above the door.

Inside the church the first thing we noticed were the 44 columns along the sides, also known as the nave.  The columns are made of pink, polished limestone, most of them dating from the original 4th-century Constantinian basilica.  Above the columns are wall mosaics paintings of saints and Mary dating from the 1160s which decorate both sides of the nave. Sadly, age and lighting make them hard to see.

As you walk along the columns you’ll notice openings in floor sections which reveal beautiful exotic mosaics surviving from the original basilica. The mosaics feature complex geometric designs with patterns of birds, flowers, and vine .   You can just picture how elaborate the carpet patterns  were in the original Constantine’s church.

The main altar at the east end and the one on the south (Altar of the Circumcision) are the property of the Greek Orthodox Church. The main altar includes an Orthodox iconostasis, which is crowned with gilded angels, icons, gilded chandeliers, and lamps. On the north side of the high altar is the Armenian Altar of the Three Kings, dedicated to the Magi who tied up their horses nearby, and in the north apse is an Armenian altar dedicated to the Virgin Mary.

Can you imagine a church being divided into Greek Orthodox, Roman Catholic and Armenian sections all under one roof? This balance of control or sharing of the church has been the status quo for centuries.  Each group is very possessive about the parts of the church and holy art under its control.

At the far end of the Church to the left is the entrance to the cryst, the Grotto of the Nativity, a rectangular cavern beneath the church.  We took the flight of steps down and entered the cave that is said to house the site of Christ’s birth.

The first thing you see on the left is an altar with a silver star on the floor that marks the exact spot where Christ is believed to have been born. The star’s Latin inscription reads, “Here of the Virgin Mary Jesus Christ was born — 1717.” The floor is paved in marble, and 15 lamps hang above the star (six belong to the Greeks, five to the Armenians and four to the Latins).

To the right of the altar is the place where Mary laid Jesus in the manger, also known as the Crib. At this point in the Grotto, the floor is lower and the space is made up of columns similar to the Byzantine ones in the nave of the church, and by the remains of two Crusader columns.

In front of the Crib is a small altar dedicated to the Magi, where the Latins celebrate Holy Mass. The structure of the Crib is not the original one but is the result of alterations necessitated by the continuous wear and tear of time and the passage of pilgrims.

Steps away from the birthplace shrine is the fragments of 12th-century wall mosaics around the manger owned by the Roman Catholics.

Back in the upper church, a door in the north apse leads to the Catholic Church of St. Catherine.  It is a Catholic church and Franciscan monastery located in the complex of the Nativity Church, over the area of the Grotto where Jesus Christ was born. According to local tradition, the church stands on the spot of Christ’s appearance to St. Catherine of Alexandria around 310 AD.

The original Church of the Nativity structure was partially destroyed by the Samaritans in 529 A.D. and then rebuilt by the Byzantine Roman emperor It is one of the oldest surviving Christian churches in existence today.

Thanks to National Geographic Expeditions, and Meiji Tours for taking us around, and the fun, informative tour.

6 Luxury Villas In St. Barts That Will Take Your Breath Away